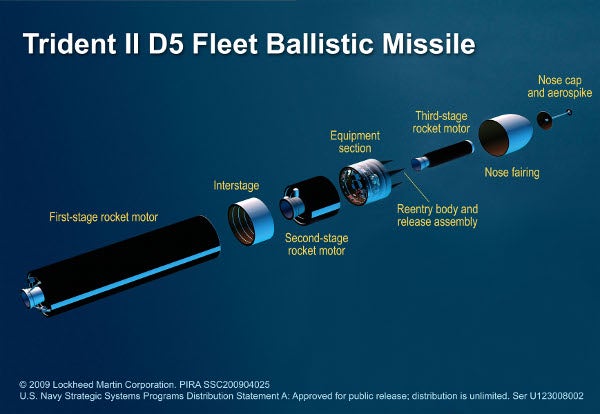 The US Navy has successfully test fired four unarmed Lockheed Martin-built Trident II D5 fleet ballistic missiles in the Atlantic Ocean, under the testing guidelines of the joint chief of staff.

During the testing, the submerged US Navy’s Ohio-class submarine launched four missiles as part of follow-on commander’s evaluation trials, marking the 145th, 146th, 147th and 148th successful test flights of the D5 missile since design completion in 1989.

Prior to testing, the missiles were transformed into test configurations using kits comprising range safety devices and flight telemetry instrumentation.

The US Navy performs a series of operational system evaluation tests for the Trident strategic weapon system as required by the US Department of Defense’s (DoD) National Command Authority.

"We are dedicated to supporting navy strategic systems programmes in assuring the system’s continued readiness, reliability, performance and affordability."

Since the inception of the Fleet Ballistic Missile programme more than 50 years ago, Lockheed Martin Space Systems has been the strategic missile prime contractor for the US navy strategic systems programmes.