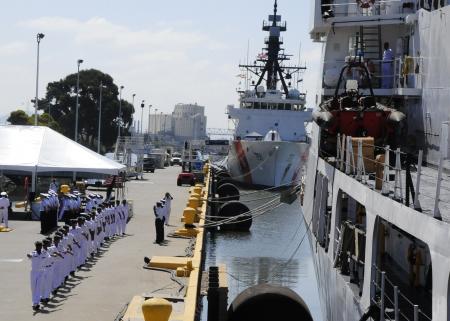 The US Coast Guard (USCG) has successfully transferred its decommissioned 3,300t Hamiltion-class high endurance cutter Jarvis (WHEC 725) to the Bangladesh Navy, during a ceremony held on Coast Guard Island in Alameda, California.

Powered by two Pratt & Whitney gas turbines and two Fairbanks-Morse diesel engines, the 378ft-long cutter was commissioned in 1972 and will be replaced by Legend-class National Security Cutters (NCS) for the USCG.

The Hamiltion-class cutter, which was renamed BNS Somudra Joy for the Bangladesh Navy, has been transferred as an excess defence articles (EDA) through a foreign military sales (FMS) programme to Bangladesh, according to bdnews24.com.

Highly versatile and capable of performing a variety of missions, the Hamilton-class ship features a helicopter flight deck, retractable hangar, and facilities to support helicopter missions.

Twenty six former Jarvis crew members will serve as advisors and assist the Bangladesh crew until the BNS Sumudra Joy sets sails to Bangladesh from California, which is scheduled for later this year.

Bangladesh Prime Minister Sheikh Hasina recently announced that the government has agreed to procure two submarines and a coastguard cutter, as part of its modernisation of the country’s navy and boosting capabilities in the Bay of Bengal.

Previously, US officials said the USCG would give the ship to Bangladesh to boost naval relationship and enhance the maritime peace and stability in the Asia-Pacific region.

In addition, the Legend-class vessels will provide better sea-keeping and higher sustained transit speeds, greater endurance and range, as well as the ability to launch and recover small boats from astern.