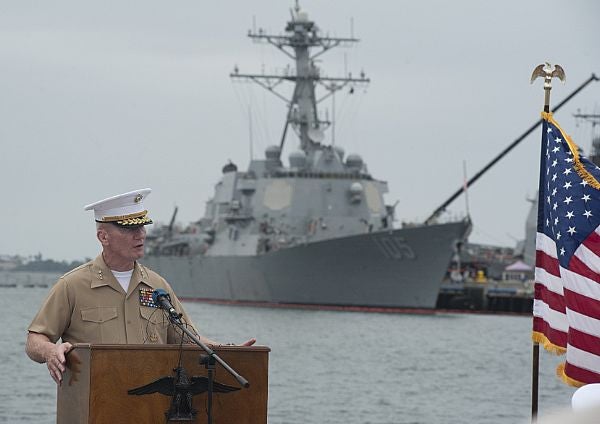 The Arleigh Burke-class vessels will be deployed to conduct a variety of operations, from peacetime presence and crisis management to sea control and power projection.

USS John Finn has been named after a retired lieutenant John Finn, who received the Medal of Honour for demonstrating "magnificent courage in the face of almost certain death" during the Japanese attack on military installations in Hawaii.

DDG 114 has been named to honour Marine Corps Pfc. Ralph Henry Johnson, who posthumously received Medal of Honour for shouting a warning to fellow marines and hurling himself on an explosive device.

"These three men are examples of the service, sacrifice, dedication and the heroism it took to be that anchor from World War II to Vietnam to Iraq."

"These three men are examples of the service, sacrifice, dedication and the heroism it took to be that anchor from World War II to Vietnam to Iraq," Toolan added.

Capable of fighting air, surface and subsurface battles simultaneously, the three ships will feature a range of offensive and defensive weapons to support maritime warfare while enabling the US Navy to conduct the defence strategy of the US Department of Defense (DoD).

Image: US Navy official during ships naming ceremony at Naval Base San Diego. Photo: courtesy of US Navy.