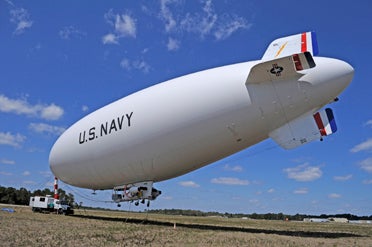 The US Naval Research Laboratory (NRL) and the US Navy have began operations of the MZ-3A lighter-than-air blimp, in the regions surrounding Washington DC, US.

Operated by the US Navy’s science and technology research squadron, Scientific Development Squadron ONE (VXS-1), the MZ-3A is conducting aerial mapping operations under the special approval of the Federal Aviation Administration (FAA) and the Transportation Security Administration (TSA).

Powered by two Lycoming engines, the 178ft-long MZ-3A has been designed to use as a testbed for intelligence, surveillance and reconnaissance (ISR) sensors requiring a stable and vibration free test eninronment.

The government-owned navy MZ-3A missions are being carried out within the DCA-Special Flight Restrictions Area (DCA-SFRA) and will be followed to northern region to Frederick Municipal Airport (FDK) in Maryland.

Prior to completing the missions which is scheduled on 5 October and departing to the Naval Air Warfare Center Aircraft Division, Lakehurst, New Jersey, the only manned US Navy airship will operate in the southwest near Culpepper, Virginia (CJR).

"The airship remains aloft and nearly stationary for more than twelve hours."

During special flight operations, pertinent Notice to Airmen (NOTAM) of information regarding visual and instrument (VFR/IFR) flight plans will be issued by the FAA to the region.

Following required or requested on designated and approved Air Traffic Control (ATC) radio frequencies, the FAA will maintain radio communication and flight, throughout the mission.

Integrated Systems Solutions is responsible for maintaining and operating the airship, which remains aloft and nearly stationary for more than twelve hours, in many locations.