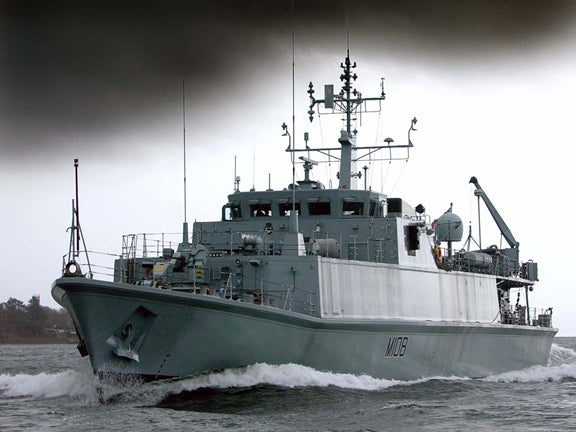 The UK Royal Navy’s Sandown-class minehunter, HMS Grimsby (M108) has marked a step forward in its £3.9m refit programme by moving from dry-dock shed to waters in the Firth of Forth.

"The Sandown-class mine hunters are highly capable ships. This overhaul will mean that Grimsby will be as formidable as ever and can continue her vital work protecting the UK’s interests around the world for many years to come."

Upgrades to HMS Grimsby include installation of new computer system, a new main gun, and latest generation of echo sounder, as well as substantial overhaul of sonar.

Following completion of refurbishment at Babcock’s Rosyth Royal Dockyard, the frigate will next undergo sea trials on the east and west coasts of Scotland, prior to its delivery in early 2013.

"This overhaul will mean that Grimsby will be as formidable as ever and can continue her vital work protecting the UK’s interests around the world for many years to come."

The vessel will remain in UK for the whole of next year and will be deployed in 2014 to carry out Nato operations.

The six-month support period (docking) (SP(D)) is the first refit to be carried out as part of the Surface Ship Support Alliance (SSSA) class output management (COM) phase 2 arrangements.

SSSA formed in April and is a coalition between the UK Ministry of Defence (MoD), Babcock and BAE Systems.

Built almost entirely of non-magnetic materials, Sandown-class vessels are armed with an Oerlikon 30mm gun with a range up to 10km and two ML Aviation Barricade lightweight decoy launchers to launch infrared decoys and chaff.