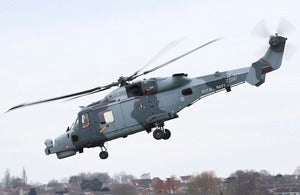 The UK Royal Navy’s first next-generation attack helicopter, the AW159 Wildcat Lynx, has conducted its maiden flight at Yeovil in Somerset, UK, the Ministry of Defence (MoD) has confirmed.

UK Defence Equipment, Support and Technology Minister Philip Dunne said: "The new maritime Wildcat attack helicopter is an excellent addition to the Royal Navy’s arsenal, providing it with greater firepower and a range of technological enhancements."

An improved version of its predecessor Westland Super Lynx, the UK’s AW159 Wildcat helicopter maritime attack (HMA) Mk2 Lynx is capable of being deployed from smaller vessels and has a payload capacity of 5,790kg, with a built-in capacity that can be increased up to 6,250kg.

UK chief of naval staff admiral Sir Mark Stanhope said that the Wildcat ship-borne helicopter would provide flexible attack capabilities for commanders to tackle a range of threats at sea.

"With state-of-the-art sensors, equipment and weapons, it will be an outstanding asset that will maintain Royal Naval units at the cutting-edge of worldwide maritime operations," Stanhope added.

"The new maritime Wildcat attack helicopter is an excellent addition to the Royal Navy’s arsenal, providing it with greater firepower and a range of technological enhancements."

Powered by two new-generation CTS800 engines, the AgustaWestland-built 6t helicopter has been designed to support missions such as anti-surface warfare, force protection and counter-piracy, as well as anti-submarine missions.

The UK MoD signed a £250m agreement with AgustaWestland in 2006 to deliver 28 Wildcats to perform various maritime attack missions for the navy aviation arm, as well as 34 aircraft to the British Army.

The first naval version of the Wildcat helicopter is due to enter service in 2015 to replace the existing Lynx Mark 8 aircraft, while the army variant is scheduled to be operational in 2014.