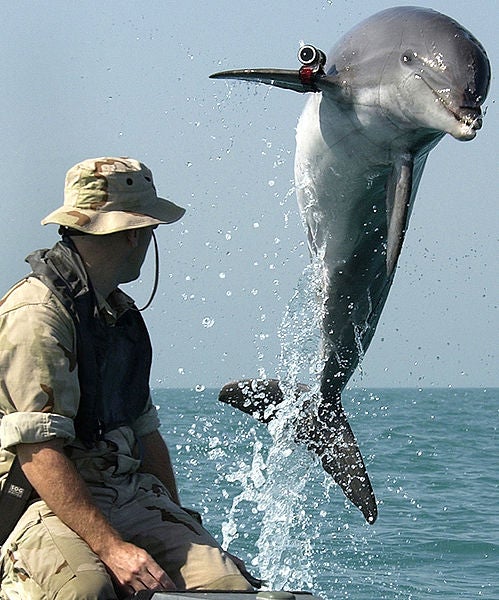 The Ukrainian Navy has resumed a military training programme for dolphins and other animals to support missions, such as combating enemy divers and mine clearance operations.

A military source in the Ukrainian naval port of Sevastopol told RIA Novosti that around ten dolphins were being trained at the Ukrainian state oceanarium for special tasks, including such as detecting items on the seabed.

Academy of Geopolitical Problems vice president captain 1st rank Konstantin Sivkov said to the Voice of Russia: "Dolphins are trained to search for objects which people find with difficulty even with the use of technical devices, including bottom mines and underwater spies."

Dolphin training dates back to 1973, when the Soviet Navy at Sevastopol was believed to have instructed and employed the mammals to help detect mines on the seabed, as well as to position explosives on enemy ships.

“Dolphins are trained to search for objects which people find with difficulty even with the use of technical devices, including bottom mines and underwater spies."

An official added: "We are now planning training exercises for counter-combat swimmer tasks in order to defend ships in port and on raids."

As well as performing patrolling, the marine mammals will be trained to use weapons such as special knives or pistols, fitted on their heads, to attack enemy combat swimmers as well as detect and attach items with floating buoys to help military track them for suspected activities.

"Our dolphins found the items and attached devices to them, which were fixed on their heads, after which a buoy on it was sent to the surface to mark it," a source said.

Two dolphin bases currently exist in the world, the Ukrainian dolphin base and one in San Diego, California, US.

Image: A bottlenose dolphin during mine clearance operation with US Navy personnel. Photo: US Navy photo by photographer's mate 1st class Brien Aho.