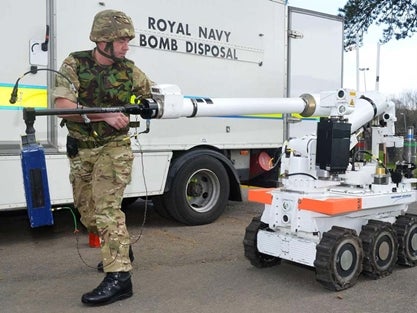 Following its delivery, the £1m Northrop Grumman-built robot was tested by the Southern Diving Group (SDG) to validate its capabilities.

Southern Dive Unit 1 officer in charge lieutenant commander Ross Balfour said that the new vehicle, controlled via a computer, features advanced optics to enable a high-level of situational awareness of its surrounding area and any device.

“CUTLASS represents a major improvement in our explosive ordnance disposal (EOD) capability, whilst improving safety for the general public and our EOD operators."

Designed for efficient detection and disposal of both vehicle-borne and IEDs from safer distances in all types of terrain and weather conditions, the six-wheeled next-generation UGV can accommodate a broad spectrum of payloads, sensors and tools.

"CUTLASS represents a major improvement in our explosive ordnance disposal (EOD) capability, whilst improving safety for the general public and our EOD operators," Balfour said.