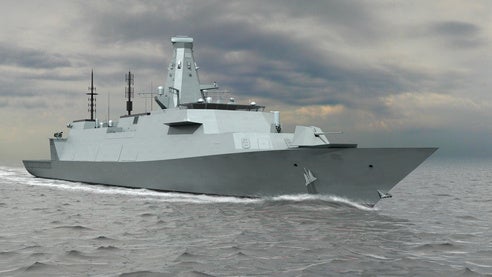 The UK Ministry of Defence (MoD) has unveiled the design of the Royal Navy's future warships, Type 26 Global Combat Ship (T26 GCS), marking a significant milestone in the development of the programme.

Peter Luff, defence equipment, support and technology minister, said the Type 26 Global Combat Ship will be the backbone of the Royal Navy for decades to come.

"It is designed to be adaptable and easily upgraded, reacting to threats as they change," Luff added.

The latest design is the result of joint efforts by BAE Systems and the MoD in determining the basic specification, including capabilities and baseline design, of the T26 GCS since 2010.

The milestone also paves the way for the programme to proceed to the next level, the assessment phase, under which detailed specifications of the vessel will be examined and determined.

Planned to enter into service after 2020, the UK Navy will use the multimission warship to perform joint and multinational operations, combat operations, maritime security operations, such as counter-piracy, and humanitarian and disaster relief work across the globe.

The 148m-long T26 GCS will have a displacement capacity of around 5400t and will feature a hangar that can hold a Merlin or Wildcat helicopter, as well as a flexible mission space for unmanned air, surface and underwater vehicles, or additional boats.

Additional features include vertical missile silos that can house a variety of weapons, a medium-calibre gun and advanced sensors.

First Sea Lord admiral Sir Mark Stanhope said that the T26 GCS will be capable of operating independently for significant periods or as part of a task group, and will play a major role in the defence of the country for many years.

Image: The Type 26 Global Combat Ship will be one of the most advanced vessels in the Royal Navy's fleet. Photo courtesy of: BAE Systems.