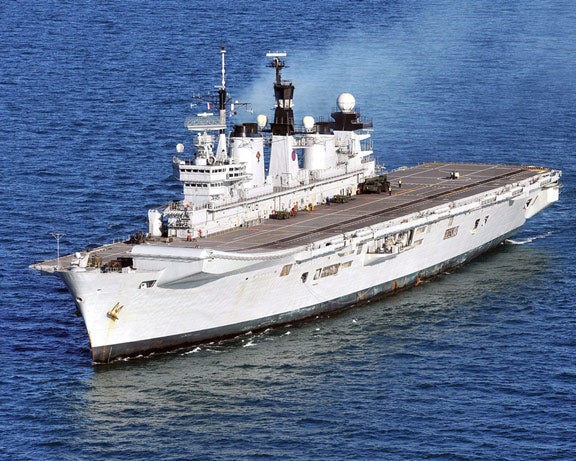 Invincible was sold to a Turkish scrap yard and recycled in 2011 and the Navy’s former flagship HMS Ark Royal, withdrawn from service as part of the 2010 Strategic Defence and Security Review, will also be recycled under a £2.9m deal with Leyal.

The MoD is currently seeking proposals for preserving HMS Illustrious as the legacy of the navy’s Invincible-class carriers, which has also played a key role during conflicts in the Falkland Islands, Iraq and Bosnia.

Defence equipment, support and technology minister Philip Dunne said: "HMS Illustrious is more suitable for preservation for further non-military use and, as such, is expected to attract interest from organisations, which would be able to put forward mature and viable proposals in keeping with the role and history of the Invincible-class of ships."

The sale of HMS Ark Royal has saved more than a hundred million pounds for the MoD, while assisting the government in balancing its budget.

"The Royal Navy’s new Queen Elizabeth-class carriers and the Lightning II aircraft that will fly off them are among the biggest projects of the now fully-funded equipment programme that will see around £160bn spent on equipment and support for our Armed Forces of the future," Dunne added.

Work on HMS Ark Royal will be performed throughout the winter in Portsmouth, after then the frigate will set sail to Turkey to begin the recycling process.

The Invincible-class vessels will be replaced by the two Queen Elizabeth-class carriers, HMS Queen Elizabeth and HMS Prince of Wales, which are due to enter service in 2016 and 2018 respectively.