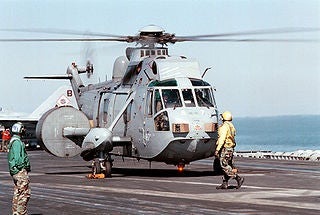 The UK Ministry of Defence (MoD) will begin the assessment phase of its Crowsnest programme in 2013, aimed to replace the Royal Navy’s Sea King Mk7 Airborne Surveillance and Control (SKASaC) aircraft.

UK defence equipment minister for support and technology, Philip Dunne, was quoted by Flightglobal as saying that the SKASaC aircraft will retire in 2016, marking a complete exit of the fleet from service.

Without disclosing the programme’s estimated cost prior to reaching a final investment decision, Dunne said that assessment phase activities will commence in 2013.

The minister also revealed that $28.6m was already expended on "relevant development work under predecessor project".

"Delivering a new system by three years is expected to create a potential airborne early warning services capability gap for the navy."

Delivering a new system by three years is expected to create a potential airborne early warning services capability gap for the navy.

Commenting on the potential delay, Dunne said: "If Crowsnest were not available immediately on retirement of SKASaC, other systems could provide a surveillance and control capability until such time as Crowsnest came into service."

As part of the Crowsnest project, Thales had earlier proposed to integrate the Royal Navy’s AgustaWestland AW101 Merlin multi-mission helicopters with existing radars.

Lockheed Martin UK Integrated Systems and Northrop Grumman have also teamed up to develop a similar product, known as Vigilance, which will be flight tested with a Merlin this month.