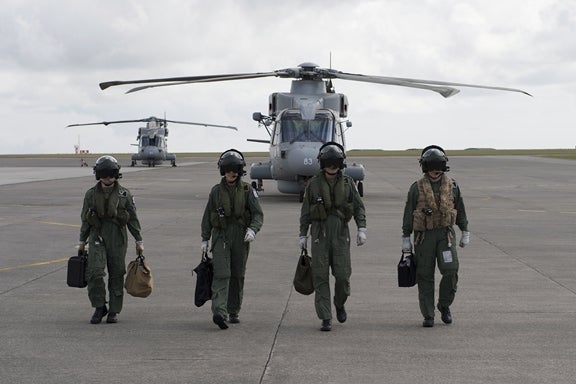 The UK Royal Navy’s first five next-generation submarine hunting helicopters have been transferred to the crews at Royal Naval air station (RNAS) Culdrose in southwest England, to prepare the helicopter for front-line duties.

The air and ground crew of the Royal Navy’s 824 naval air squadron (NAS) will learn how to get the most out of the souped-up helicopter over the next 12 months, prior to its deployment.

Earlier, the UK Ministry of Defence (MoD) had awarded a £750m contract to Lockheed Martin and AgustaWestland to upgrade a total of 30 Merlin Mk1 helicopters to Mk2, to resolve obsolescence issues in the current Mk1 variant and reduce through life costs.

"The Merlin Mk2 helicopters have been fitted with advanced glass cockpits and improved aircrew consoles and avionics."

Scheduled to enter service in 2014, the Merlin Mk2 helicopters have been fitted with advanced glass cockpits and improved aircrew consoles and avionics to support counter-piracy and casualty-evacuation missions for the Royal Navy.

Featuring advanced touch-screen displays, the helicopter will provide enhanced targets detect and track and share data with other aircraft and ships while airborne.

The Merlin Mk1 helicopters have been used by the Royal Navy’s fleet air arm for supporting missions such as detecting submarines, anti-piracy / drug-running patrols, surveillance and reconnaissance, search and rescue, and passenger and load transfers.

Once deployed, the Merlin air and ground crew will either operate with the carrier squadrons 814 and 820 NAS, which typically deploy en masse on a Royal Navy carrier or 829 NAS, which provides Merlin flights for Type 23 vessels.

Image: Royal Navy’s Merlin helicopters at a base. Photo: courtesy of The Royal Navy.