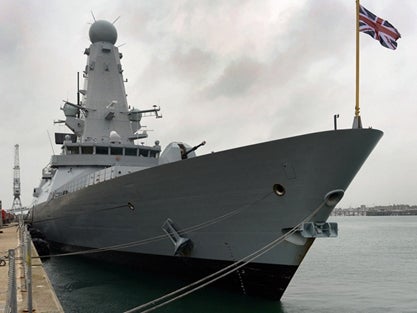 The first four type 45s have experienced life on operational deployments, while the fifth in the row, HMS Defender, is expected to be deployed for the first time in next year.

HMS Duncan is expected to continue an intense period of trials and training around the UK, until it is ready to take operational tasking, along with other sister ships across the globe.

Duncan commanding officer commander James Stride said the commissioning ceremony is a major milestone in the life of HMS Duncan.

"We are delighted that it was shared with so many distinguished guests, friends, family, affiliates and former Duncanites."

The type 45 destroyers have been designed to replace the type 42 frigates, currently in service and deployed by the navy since the mid-1970s.

Designed to boost UK’s naval air defence capabilities over the next 30 years, the type 45 frigates will support missions including anti-piracy and anti-smuggling activities, disaster relief work and surveillance operations, as well as high-intensity war fighting.