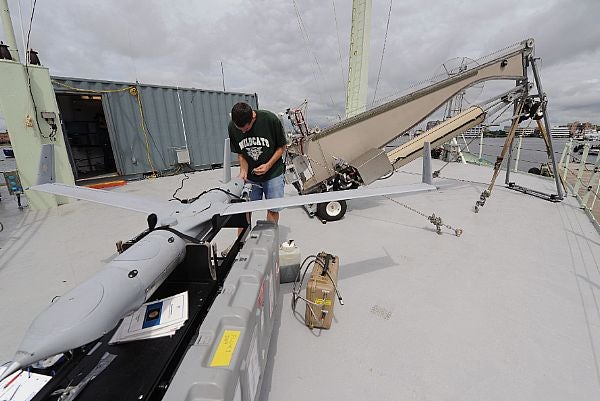 US Navy scientists have evaluated the real-time measurements of variations in atmospheric and ocean conditions, using Insitu-built ScanEagle unmanned aerial vehicles (UAV), which could help boost the US Navy’s radar and communications performance at sea.

During the testing, conduct in preparation of navy warfare development command-organised trident warrior 2013, the annual fleet experiment, the UAV was launched from the Office of Naval Research’s (ONR) research vessel Knorr to explore ocean and atmospheric weather variations.

Accurate and real-time measurements of variations have been gathered in atmospheric and ocean conditions off Virginia Beach, US, by the UAV, and delivered the data to personnel aboard a destroyer and an amphibious assault ship, as part of the experiment.

ONR’s ocean battlespace sensing department programme officer Dr. Dan Eleuterio said: "We need to understand where we are in relation to this ducting environment and understand the energy we’re emitting and the energy an adversary is emitting."

"The variations could change the radar and radio waves’ bend angle, which makes the ships more difficult to remain undetected."

The variations could change the radar and radio waves’ bend angle, which makes the ships more difficult to remain undetected and prevents their ability to communicate or locate adversaries.

Oceanographer of the navy capabilities and requirements on the staff head commander Rob Witzleb said: "Using UAVs is giant leap forward, in that they can give us near-continuous data across multiple parameters where the atmosphere is the most unpredictable."

The research, sponsored by ONR’s ocean battlespace sensing department and the oceanographer of the US Navy, aboard R/V Knorr, also intends to expand the US Navy’s reach of its sensors and platforms with unmanned and autonomous systems.

Image: a US Navy’s ScanEagle UAV aboard a ship. Photo: courtesy of John F. Williams.