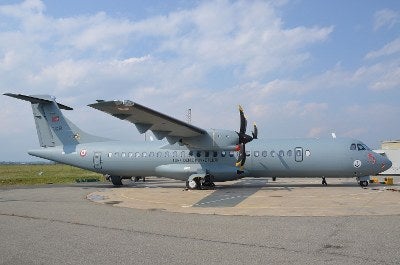 Under the contract, the company will supply the first TMPA to the Turkish Navy in February 2017 while deliveries are scheduled to be completed by 2018.

The two ATR 72-600 TMUA, which are undergoing modification at the company’s facilities in Naples, Capodichino and Torino-Caselle, will be used by the Turkish Navy for utility roles and personnel and cargo transport missions.

Fitted with new radios, the TMUA aircraft features an identification friend-or-foe system (IFF) as well as tactical tables and communications equipment for the crew.

The second ATR72-600 TMUA is expected to be delivered within the first half of August while first Turkish Navy flying instructors have completed the new aircraft training at Alenia Aermacchi’s Training Centre in Caselle.

Image: the Turkish Navy’s ATR72-600 aircraft stationed at a base. Photo: courtesy of Alenia Aermacchi.