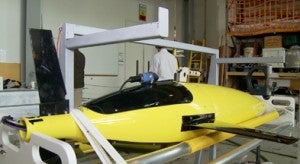 During the training, conducted by University of Washington applied physics laboratory, sailors have familiarised themselves with the UUV’s field and command centre operations in PLUS-specific contexts.

Undergoing testing as a PLUS prototype system component, the University of Washington applied physics laboratory-built sea glider autonomous vehicle can propel itself from the water’s surface to the ocean floor, collecting environmental data.

"The University of Washington laboratory-built sea glider can propel itself from the water’s surface to the ocean floor, collecting environmental data."

Capable of detecting underwater threats including diesel submarines, the PLUS is being fielded by the Program Executive Office for Littoral Combat Ships (PEO LCS).

The sea gliders will gather the Remus 600′ underwater data and then return to the surface to transfer the collected data to a shore-based collection and processing station.

The US Navy is planning to deploy the system in 2015 for overseas operations, as a user operational evaluation system, while thedecision on which ship to be installed will be made in near future.

Based on the testing results, the US Navy will determine the feasibility of expanding the system’s scope for broader deployment to the fleet.

Image: A sea glider UUV in factory. Photo: courtesy of University of Washington.