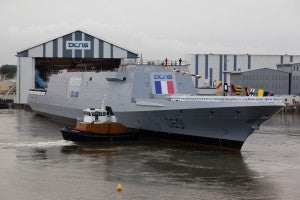 The contract follows a previous award by Kongsberg Defence & Aerospace and DCNS in 2007-2008 to supply the Scanter 2001 radar for installation onto the French vessels.

Terma has already delivered two Scanter 2001 radar systems with 7in antennas, as well as Scanter tracking units for the initial seven FREMM vessels.

One of the Scanter 2001s will be used primarily for navigation and surveillance, while the other radar system will assist helicopters during landing on the frigate flight deck.

"One of the Scanter 2001s will be used primarily for navigation and surveillance, while the other radar system will assist helicopters during landing on the frigate flight deck."

Scanter 2001 is a highly sensitive and high-resolution radar system, designed to provide interference rejection, signal processing, and resistance in a tough environments, while maintaining continuous radar coverage with necessary parameters.

DCNS is under contract to build 12 FREMM ships, of which 11 vessels are for the French Navy, and one for the Royal Moroccan Navy.

In addition to providing anti-air, anti-surface and anti-submarine warfare capabilities, FREMM frigates offer high levels of interoperability and readiness; they also respond to countering threats from air, sea and land for the navy.

Capable of accommodating a crew of 145, the 142m-long French frigate has a displacement capacity of 6,000t and can cruise at a speed of 27k.