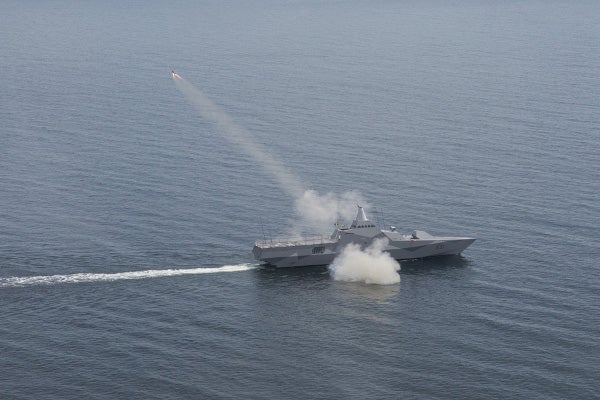 The Swedish Navy’s first Visby-class corvette HMS Visby has successfully test fired a RBS15 anti-ship missile, marking a major milestone in the development of the ship, off dry-dock at Karlskrona, Sweden.

Third Naval Warfare Flotilla Visby’s trials crew head Frank Johnson added: "Both the crew of the HMS Visby and staff have worked extremely hard in recent times to get everything to work and it is particularly gratifying that all went according to plan."

The FMV is scheduled to deliver the final version of the first two Visby corvettes, equipped with an entire range of heavy weapons, to the Swedish Armed Forces in the later part of 2012.

The 72m-long Visby-class ships has been designed for mine countermeasures and anti-submarine warfare (ASW) and feature a suite of ASW equipment, 127mm rocket-powered grenade launchers, depth charges and torpedoes.

"Both the crew of the HMS Visby and staff have worked extremely hard in recent times to get everything to work and it is particularly gratifying that all went according to plan."

The Swedish FMV had originally received the lead ship of the class, Visby (K31) in June 2002, while the second and third HMS Helsingborg (K32) and Harnosand (K33) were officially delivered in June 2006.

The fourth Nykoping (K34) vessel was delivered to the Swedish FMV in September 2006 and the fifth Karlstad (K35) ship was launched in August 2006.

The Swedish Navy will receive all five modernised ships by 2014, while the last vessel will be used to support attack and anti-surface warfare operations.

FMV, Kockums and the Royal Institute of Technology in Sweden have collaborated to provide materials and construction techniques for the frigates.