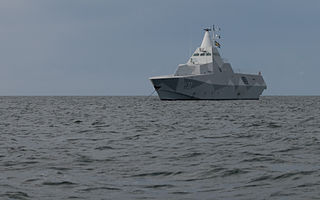 The Swedish Defence Procurement Agency (FMV) has delivered the final version of the first Visby-class corvette, HMS Visby (K31), to the Swedish Navy.

The 41st Corvette Division commander Anna-Karin Broth said: "There remain several trials and exams before we can start using HMS Visby fully, but right now it feels good that the ship is finally delivered to the Armed Forces.

Currently, a crew of 43 are undergoing training to handle the ship and its systems.

The Kockums-built 73m-long HMS Visby has been designed for mine countermeasures and anti-submarine warfare (ASW), as well as to support attack and anti-surface warfare operations.

Featuring a suite of ASW equipment, 127mm rocket-powered grenade launchers, depth charges and torpedoes, the Visby-class ships have a beam of 10.4m, a displacement capacity of 640t and can cruise at a maximum speed of 35k.

Visby (K31) was originally handed over to the Swedish FMV in June 2002; in June 2006, the second and third HMS Helsingborg (K32) and Harnosand (K33) were officially delivered.

FMV had taken delivery of the fourth vessels of the class, Nykoping (K34), in September 2006, while the fifth Visby-class vessel, Karlstad (K35), was launched in August 2006.

Visby-class corvettes have been developed to minimise the optical and infrared signature, underwater electrical potential and magnetic signature, above water acoustic and hydroacoustic signature, as well as radar cross section and actively emitted signals.

All five modernised ships are scheduled to be delivered to the Swedish Navy by 2014.