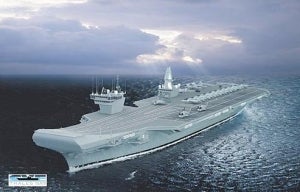 The government originally declared the first Queen Elizabeth Class aircraft carrier would fly a version of the fighter jet requiring a catapult and arrester wire or ‘cat and trap’ but has now backed down after cost estimates soared by up to £3billion.

Defence secretary Philip Hammond said in parliament earlier: "I can announce to the house today that the National Security Council has decided not to proceed to the cats and traps conversion, but to complete both carriers in the STOVL configuration."

The minister stated that the ‘cats and traps’ system could not be delivered until 2023 rather than 2020 as originally planned and that estimated cost of fitting the equipment to the first carrier had risen from £950m to £2bn.

Fitting it to a second carrier could take the cost up to £3bn, according to Hammond.

Shadow defence secretary Jim Murphy labasted the government for its decision to revert to the original choice.

"This is a strategically vital element of the equipment programme on which our security and thousands of jobs depend and yet ministers have treated it with hubristic incompetence, wasting hundreds of millions at a time of painful defence cuts," said Murphy.

Former Liberal Democrat leader Sir Menzies Campbell continued the criticism. "[It is an] eloquent demonstration of what is seriously wrong with UK defence procurement," he said.

Reverting to the F35-B vertical landing model is now believed to bring the launch to 2018, with sea trials for the first Carrier expected to begin in 2017.

Lockheed is currently developing the multirole stealth F-35 for the US Military and eight other international partners including the UK at a total projected cost of around £245bn.