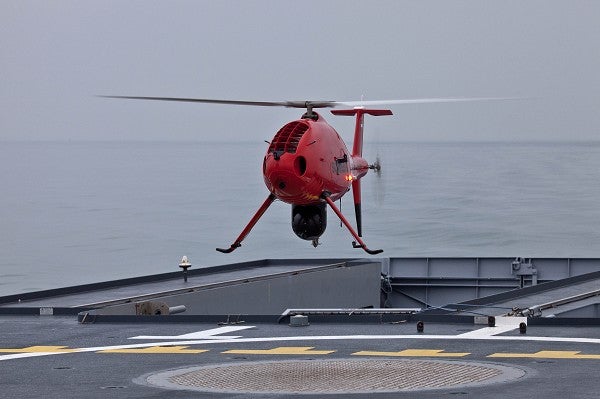 During the trials, conducted to improve the UAV's automated launch and recovery capability in GPS-denied environments, the Camcopter S-100 has been integrated with DeckFinder receiver segment system at the Schiebel Testing Grounds close to Vienna, Austria.

The week-long flight testing has been designed to evaluate the medium-range, medium-endurance UAV capabilities, fitted with that DeckFinder, in terms of highly accurate automated operations.

Schiebel Group chairman Hans Georg Schiebel said: "By feeding the position data generated by the Astrium DeckFinder System directly into the avionics of our CAMCOPTER S-100, we are now able to operate fully automatically, independent from global positioning systems during hovering, approach and landing, enabling us to launch and recover in environments that no-one has been able to perform before."

"We are now able to operate fully automatically, independent from GPS during hovering, approach and landing, enabling us to launch and recover in environments that no-one has been able to perform before."

Featuring six radio-frequency-based transmitters (Pseudolites) and a corresponding airborne receiver, the DeckFinder system will provide highly accurate and relative 3D position information while enabling the UAV to navigate with accuracy better than 20cm over the landing zone.

The DeckFinder local positioning system, based on GPS-independent range measurements, also allows users to operate Camcopter even with high-degrees of autonomy from small vessel decks, and in adverse weather environmental conditions.

The Camcopter S-100 UAV, equipped with a vertical take-off and landing (VTOL) system can be used to conduct search and rescue operations, aerial photography and even crowd control using tear gas in civil applications.

Powered by a single 50hp Diamond engine, the UAS can carry 34kg payload including EO/IR sensors for military and civilian operations for up to six hours in a standard configuration.