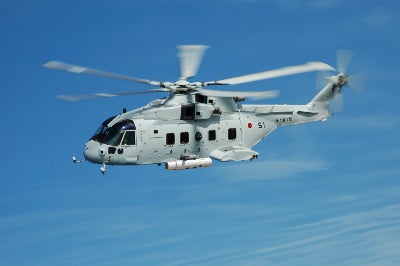 Under the contract, SAIC will provide the system in support of the JMSDF’s AgustaWestland MCH-101 helicopter airborne mine countermeasures (AMCM) programme.

The company will also provide assistance, as well as engineering and training services to integrate the software system within the broader MCH-101 ground support system.

"This sale of MEDAL helps make the JMSDF and the US Navy more interoperable."

MEDAL has been designed to provide mission planning, evaluation, and command and control of AMCM missions.

Northrop has delivered four ALMDS for use on JMSDF’s AgustaWestland MCH-101 helicopters to boost coastline protection and daily maritime traffic.

The JMSDF MEDAL system will also support planning and evaluation of the MCH-101 AMCM systems, as well as provide increased levels of interoperability with the US Navy.

In 2003, the JMSDF ordered 14 aircraft to support both AMCM and transport missions, while the Japan Defence Agency designated the modified version of the AW101 as MCH-101.