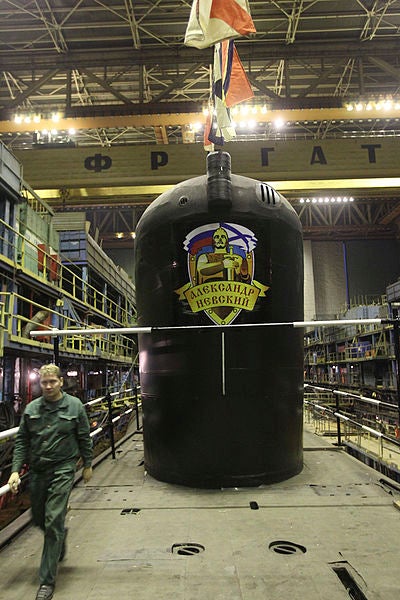 Sevmash shipyard’s press service was cited by RIA Novosti as saying that the SSBN Alexander Nevsky deployment to the Russian Navy’s Pacific Fleet was rescheduled by former Russian defence minister Anatoly Serdiukov from 2013 to 2014.

The fourth-generation submarine had recently completed sea trials and validated all its onboard systems capabilities in different modes, apart from demonstrating propulsive performance and manoeuvrability.

"Alexander Nevsky can carry up to 16 ballistic missiles and torpedoes."

Powered by an OK-650 nuclear reactor and AEU steam turbine, Alexander Nevsky can carry up to 16 ballistic missiles and torpedoes, including the Bulava (SS-NX-30) sea-based submarine-launched ballistic missile (SLBM).

The lead submarine of the series, SSBN Yury Dolgoruky, is ready to be delivered to the Russian Navy, while two other vessels, Vladimir Monomakh and Knyaz Vladimir, were recently laid down.

The Bulava missile has undergone trials validating its capability, and it is expected to enter service with the Yury Dolgoruky.

By 2015, eight Borei-class submarines are planned to be constructed for the Russian Navy to replace the existing Project 941 and Project 667 (Nato Typhoon and Delta-3 and Delta-4)-class ballistic missile, as part of a state 2020 rearmament procurement programme.