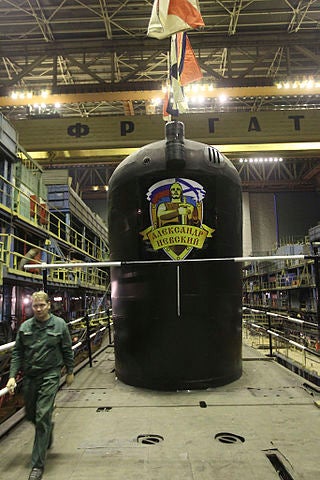 The Russian Navy has postponed testing of the Bulava (SS-NX-30) sea-based submarine-launched ballistic missile (SLBM), due to a technology fault in the automated launch control system, according to defence minister Anatoly Serdyukov.

Developed by the Moscow Institute of Thermal Technology, the SS-NX-30 submarine-launched ballistic missile (SLBM) is capable of carrying up to ten MIRV warheads and has a range of more than 8,000km.

Designed to replace the R-39 solid-fuel SLBM for the Russian Navy, the three-stage Bulava is expected to undergo its next test-launch from Russia’s second Borey-class submarine, Alexander Nevsky, before the end of 2012.

"There are technical problems involving software in the automated launch control system and we are trying to fix them."

Bulava ICBM had been put through a series of 18 to 19 test launches before deployment, of which only 11 have been officially declared as successful.

The Russian military had previously claimed there was no alternative to the Bulava missile despite it facing several previous failures, which were attributed to manufacturing faults.

Test launches of the missile have been carried out from the Typhoon-class Dmitry Donskoy submarine and the first strategic nuclear submarine of Project 955 Borey-class submarine, Yuri Dolgoruky, to date.

Yury Dolgoruky, the Russian Navy’s newest submarine, is scheduled to be deployed equipped with Bulava missiles.