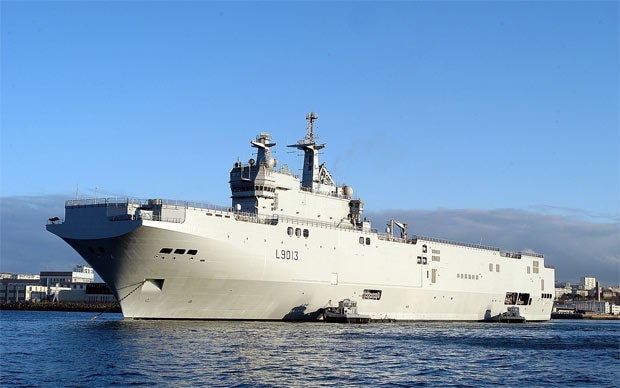 RIA Novosti cited the official as saying that the ship will be equipped and followed by sea trials prior to delivery.

Being built at the DCNS shipyard in Saint-Nazaire, the Vladivostok ship is due to be floated out on 15 October.

The ship delivery is worth part of a $1.52bn deal signed by Russia in June 2011 for the procurement of two Mistral-class aircraft carriers from France.

Under the deal, which also includes transfer of technology, DCNS will serve as the prime contractor while STX shipyard, Saint-Nazaire in western France and Russian shipbuilder OSK will be subcontracted for the shipbuilding platforms.

As part of an intergovernmental agreement, Russia will also procure two additional Mistral-class ships, which will be built 80% in Russia and 20% in France.

The 199m-long, 22,000t Mistral-class ships feature MRR-3D NG surveillance radar and a high-performance communications suite to support humanitarian operations and a variety of other missions.

Capable of cruising at a speed of 18k, the ships are armed with two Breda Mauser 30mm naval guns and four 12.7mm machine guns.

French-built Mistral-class ships can accommodate a crew of 450 and 16 helicopters, including eight Ka-52K and eight Ka-29/31 Helix assault transport helicopters, as well as four landing vessels and 70 armoured vehicles.

The second ship of the class is scheduled to be delivered to Russia in 2015.