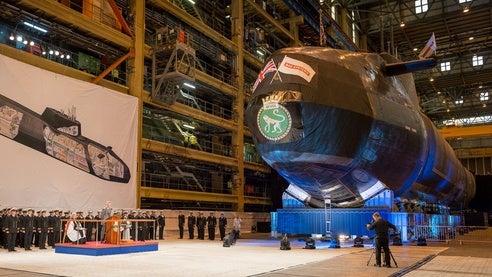 The UK Royal Navy’s third Astute-class nuclear-powered submarine has been christened as HMS Artful (S121), during a ceremony held at BAE Systems’ shipyard in Barrow-in-Furness, UK.

Built by BAE Systems, the 97m-long and 11.3m-wide submarine can accommodate a crew of 98 and will eventually replace existing Swiftsure and Trafalgar-class vessels for the Royal Navy.

UK Defence Equipment, Support and Technology minister Philip Dunne said that the HMS Artful is the one of most advanced attack submarine ordered by the UK Ministry of Defence (MoD), to offer unprecedented levels of stealth and attack capability for the Royal Navy.

"The Astute submarine building programme represents a significant investment by the government and is set to sustain over 5,000 UK jobs within BAE systems and the 400 separate suppliers across the supply chain," Dunne said.

First Sea Lord Admiral, sir George Zambellas, said: "Ahead of her, HMS Astute and HMS Ambush are already being pressed hard towards operational use, contributing to the wider renaissance in the UK’s naval equipment programme and adding to the Royal Navy’s operational authority."

"The design and build of a nuclear-powered submarine is as challenging as it is complex."

"The design and build of a nuclear-powered submarine is as challenging as it is complex, so today represents a significant milestone in Artful’s programme," Hudson said.

Scheduled to be launched early next year, HMS Artful is expected to start sea trials in early 2015.