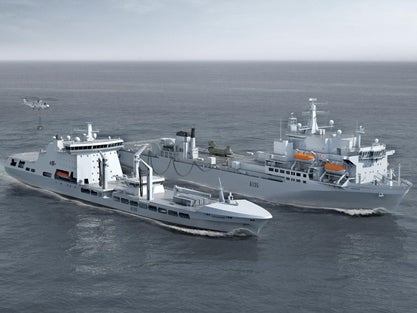 The four Tide-class MARS tankers, comprising Tidespring, Tiderace, Tidesurge and Tideforce, will enter service with the Royal Navy to boost its capabilities by delivering fuel, water, spare parts and other supplies.

In cooperation with the Royal Navy and RFA, BMT Defence Services has completed design for the four next-generation tankers with hundreds of design drawings and plans.

"A Range Rover’s fuel tank connected to all four 7in hoses on the starboard size of a Tide tanker would be full in 0.12 seconds."

The future tanker project naval architect Mark Lewis said: "A Range Rover’s fuel tank connected to all four 7in hoses on the starboard size of a Tide tanker would be full in 0.12 seconds."

Following completion of a £450m quartet design of the 37,000t ships, Daewoo Shipbuilding and Marine Engineering (DSME) will draw up detailed plans to begin construction on the ships next year at Okpo-dong in south-east South Korea.

The UK Ministry of Defence (MoD) awarded a contract to DSME in 2012 for the construction of four MARS tankers to replace the existing RFA’s single hulled tankers, with the first ship of the class due to be delivered in October 2015, with the final vessel due in April 2017.

The new double-hulled tankers will be designed to meet International Maritime Organization pollution (MARPOL) regulations, an International Convention for the Prevention of Pollution from Ships 1973 and the protocol of 1978, as well as European Commission environmental regulations.