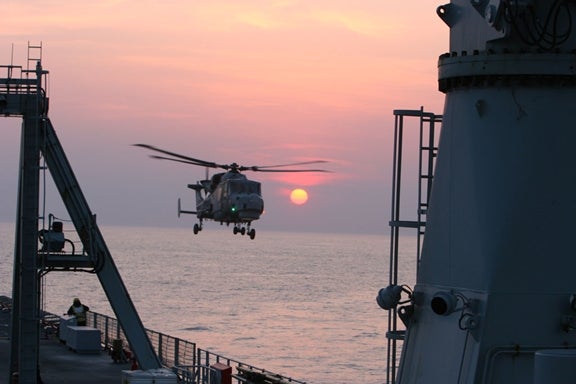 Experts from 700W Naval Air Squadron conducted day and night landing trials on and off the ship deck off the South Coast, to validate its capability prior to its deployment with the Royal Navy.

Commenting on the helicopter, 700W commanding officer Lieutenant commander Rob Taylor said it exceeded all expectations during the trials.

"This recent activity will provide a springboard for further radar and sensor trials before, in 2014, the training of the next generation of pilots and observers who will take the Royal Navy's newest maritime attack helicopter to sea, is due to commence," Taylor added.

An improved version of its predecessor Westland Super Lynx, the UK's AW159 Wildcat helicopter maritime attack (HMA) Mk2 Lynx is capable of being deployed from smaller vessels and has a payload capacity of 5,790kg.

"Flying to a moving deck is one of the most demanding evolutions any aircrew can conduct and it is vital the team is fully-trained in this task to support further tactical development activity on the squadron."

"Flying to a moving deck is one of the most demanding evolutions any aircrew can conduct and it is vital the team is fully-trained in this task to support further tactical development activity on the squadron," Taylor added.

Under a contract signed by the UK Ministry of Defence (MoD) with AgustaWestland in 2006, the navy aviation arm will receive 28 Wildcats to perform various maritime attack missions, while 34 aircraft will be provided to the British Army.

The first naval version of the Wildcat helicopter is due to enter service in 2015 to replace the existing Lynx Mark 8 aircraft, while the army variant is scheduled to be operational in 2014.