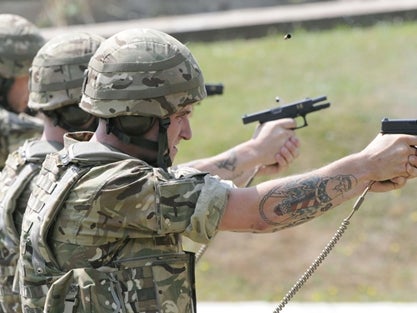 UK Royal Navy sailors have been trained to use the new Glock 17 pistol, as part of a training course conducted at HMS Raleigh’s military training unit.

During the three-day course, conducted as part of pre-deployment training, a group of 17 sailors have been trained to safely fire and maintain the new pistol.

A formal assessment was also conducted to ensure each sailor could competently and accurately use the weapon.

Royal Marine instructor colour sergeant Kevin McBain said the modern Glock 17 is a lighter combat weapon with a higher magazine capacity of 17 rounds, when compared with 13 for the Browning sidearm.

"The Glock came out trumps on the trial, so that’s the pistol the armed forces have adopted," McBain said.

The Royal Navy has received the new Glock 17 9mm pistol as part of the UK Ministry of Defence’s (MoD) previously signed £9m contract with Viking Arms.

"The modern Glock 17 is a lighter combat weapon with a higher magazine capacity of 17 rounds."

Under the contract, the company will supply 25,000 weapons and holsters to replace the aging Browning 9mm sidearm, which is becoming increasingly expensive to maintain.

"It was first brought into service in 1967, but it’s now proving difficult to maintain so it’s time for a replacement," McBain continued.

Vital in a close combat situation, the Glock 17 short-barrelled weapons will be used by Royal Marines as well as Royal Navy aircrew, divers and sailors for boarding operations.