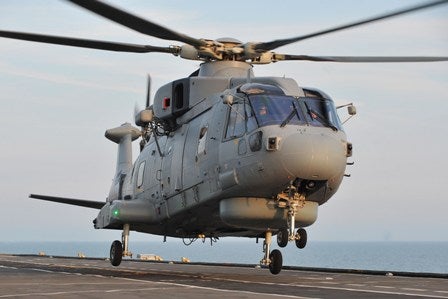 The UK Ministry of Defence (MoD) had awarded a £750m contract to Lockheed Martin and AgustaWestland to upgrade a total of 30 Merlin Mk1 helicopters to Mk2, to resolve obsolescence issues in the current Mk1 variant and reduce through life costs.

The first five Merlin HM Mk2 helicopters, which have been delivered to the Royal Navy’s 824 naval air squadron based at RNAS Culdrose in southwest England, will undergo a series of extensive trials.

"The Merlin Mk2 helicopters have been fitted with advanced glass cockpits and improved aircrew consoles and avionics to support counter-piracy."

Scheduled to enter service in 2014, the Merlin Mk2 helicopters have been fitted with advanced glass cockpits and improved aircrew consoles and avionics to support counter-piracy and casualty-evacuation missions for the Royal Navy.

Featuring advanced touch-screen displays, the helicopter will provide enhanced targets detect and track and share data with other aircraft and ships while airborne.

Merlin helicopter force commanding officer commander Ben Franklin said: "The delivery of the first five aircraft to the Royal Navy’s fleet air arm is a real milestone of this successful programme which will provide vital support to the navy as it fulfils its role in protecting UK interests across the globe."

The Merlin Mk1 helicopters have been used by the Royal Navy’s fleet air arm for supporting missions such as detecting submarines, anti-piracy/drug-running patrols, surveillance and reconnaissance, search and rescue, and passenger and load transfers.