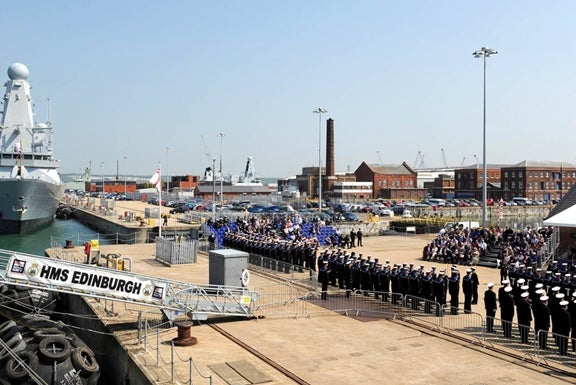 Prior to its decommissioning, the 141m-long, 5,200t HMS Edinburgh has completed its final deployment conducting routine operations across the South Atlantic, including supporting counter-narcotics efforts in the West African region and providing support and reassurance to UK overseas territories.

Initially deployed to escort numerous merchant ships safely through the region off the Gulf in 1987, the ship was also deployed to escort the helicopter carrier HMS Ocean while supporting Royal Marines ashore in the second Gulf War in 2003.

Armed with a twin Sea Dart missile launcher, 4.5in Mk8 gun and a Phalanx close-in weapon system (CIWS), the ships can operate independently and conduct patrol and boarding operations, anti-narcotics and anti-piracy patrols, as well as provide humanitarian assistance.

Capable of carrying a crew of 287, the Type 42 ship underwent a £17.5m refit by BAE systems in 2010, when its propulsion machinery, auxiliary and weapons systems, sensors and accommodation were upgraded.