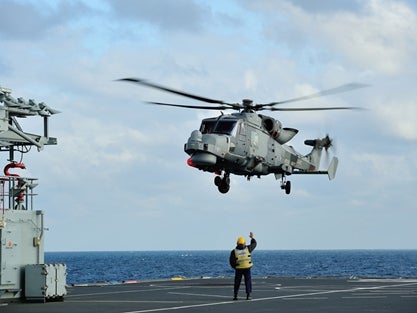 During the five weeks of key trials, the ship’s company will gather data, information and tips on aircraft movements and ground power supplies while QinetiQ scientists provide instruments to record the motion and wind conditions of the ship.

The helicopter is due to enter service in just 15 months and will conduct missions from Royal Navy’s helicopter and aircraft carriers Queen Elizabeth-class ships.

In addition to RFA Argus, the helicopter is also expected to operate from the Royal Navy’s landing platform helicopter assault ship, HMS Ocean, as well as assault ships such as HMS Bulwark.

Rotary Wing Test and Evaluation Squadron lead test pilot lieutenant commander, Rob Dowdell, said the test pilots are sharing the flying and assessing the helicopter’s degree of difficulty for each deck landing and take-off during the trials.

"The helicopter is due to enter service in just 15 months."

"Maintainers from 700W squadron are spreading and folding the Wildcat and acting as refuelling and lashing numbers, Argus’ aircraft handlers and the ship bridge and flying control team are providing the required deck conditions under the direction of civilian experts from QinetiQ at Boscombe Down," Dowdell said.

"Finding the right weather for testing is crucial with the perfect mix of wind speed, temperature, air pressure and sea state being critical to gathering the right quality data that will allow future global Wildcat deployments," Dowdell continued.

Upon completion of sea trials on 7 November, the team will compile a comprehensive report documenting all the new limitations and lessons learned.