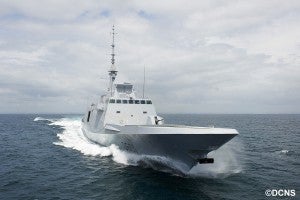 During testing, the ship demonstrated its combat system’s main sensors performance capabilities by maintaining consistency of the data analysed and displayed, with the results obtained during shore-based simulations.

Scheduled to be delivered at the end of 2013, the ship has validated its target engagement sequences using Aster anti-air and MM40 anti-ship missiles, as well as undergoing fire-control tests for the 76mm main gun and exhaustive testing of the multifunction radar.

"Our crews thoroughly tested the full suite of combat system hardware and software that makes FREMM frigates among the most versatile and advanced on the world market."

"Our crews thoroughly tested the full suite of combat system hardware and software that makes FREMM frigates among the most versatile and advanced on the world market," Raybaud said.

DCNS is currently under contract to build 11 FREMM ships for the French Navy and one for the Moroccan Navy.

The French Navy received the first FREMM vessel, Aquitaine, in November 2012, while the third ship of the class, named Normandie, is scheduled to be commissioned in May 2014.

FREMM vessel Provence, the fourth ship of the class, is due to be rolled out of building dock later this year for the French Navy, while the fifth and sixth of type are undergoing construction.