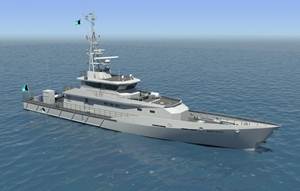 The Bahamas Government has signed a letter of intent with Damen Shipyards Group for the procurement of nine vessels and construction of three naval bases for the Royal Bahamas Defence Force, under a six-year acquisition programme.

The RO/RO landing craft will also feature emergency relief, medical facilities, desalinated water and sanitary equipment for rapid deployment in the event of a natural disaster.

Designed to bridge the gaps in the security network and address protection needs of the nation, the SPa 4207 vessels will be deployed to the economic exclusive zone and area of responsibility of the Bahamas and SPa 3007 will conduct missions in the coastal waters and shallow waters of the country.

The new SPa 3007 will be built with a shallow draft, whereas SPa 4207 will feature a range of more than 2000nm, maximum speed of 20k and operational endurance in excess of ten days.

“The company will upgrade three naval bases in the Bahamas and provide dredging work to accommodate the new long-range patrol craft."

In addition, the company will upgrade three naval bases in the Bahamas and provide dredging work to accommodate the new long-range patrol craft.

The company will also provide a mid-life upgrade to the Bahamas-class vessels, which entered operational service with the defence force in 1999, to extend the operational life for several years.

As part of the contract, the mid-life upgrade work aboard the vessels will be performed under Damen's administration.

Scheduled to start in early 2014, the Sandy Bottom package also includes spares and training package to ensure the vessels are well maintained and operated by the force.