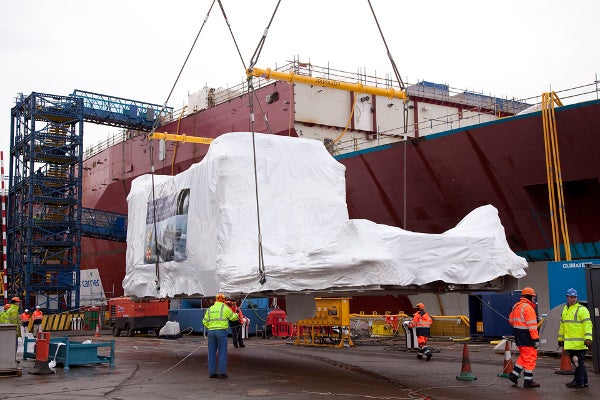 “The two 280m-long and 74m-wide Queen Elizabeth-class carriers feature a total runway area of 13,000m² and can carry 40 aircraft."

Each of the two Queen Elizabeth-class aircraft carriers, HMS Queen Elizabeth and HMS Prince of Wales, will be equipped with two 36MW MT30s to provide power equal to two thirds of the 109MW.

Integrated as part of a gas turbine alternator (GTA), the power generated by the MT30s will meet the carriers’ demand for energy such as propulsion motors, weapons and navigation systems, as well as the entire low-voltage requirements for lighting and power sockets.

Weighing a total of 120t, the GTA includes an alternator and gas turbine enclosure.

Designed to provide cost-effective propulsion, the compact, lightweight MT30 is a twin-spool, engine based on the Rolls-Royce Trent 800 aero engine technology.

With a full-load displacement capacity of 65,000t, the two 280m-long and 74m-wide Queen Elizabeth-class carriers feature a total runway area of 13,000m² and can carry 40 aircraft.

Currently undergoing construction at shipyards around the country, the two aircraft carriers are scheduled to enter service in 2016 and 2018 respectively.

The carriers can accommodate a crew of 1,200, including an aircrew of 600.