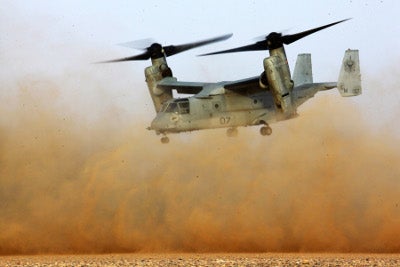 The US Department of Defense (DoD) has awarded a contract to Rolls-Royce to deliver AE 1107C engines in support of the V-22 Osprey aircraft programme.

Under the $83.7m modification contract, part of a previous award, the company will provide 38 engines to power 19 V-22 Osprey aircraft operated by both the US Marine Corps (USMC) and the US Air Force (USAF).

Rolls-Royce Defence president Tom Bell said: "This contract demonstrates the trust the US Marine Corps and Air Force have in the Rolls-Royce AE 1107C engines which power their V-22 fleets."

"This contract demonstrates the trust the US Marine Corps and Air Force have in the Rolls-Royce AE 1107C engines, which power their V-22 fleets."

Work under the latest contract will be carried out at the company’s facility in Indianapolis, Indiana, while the US Naval Air Systems Command will serve as the contracting activity.

Rolls-Royce will continue to provide real-time engineering support for V-22 operators, as well as support for the AE 1107C engine fleet through the new Defense Operations Center in Indianapol, US.

Part of the AE product line, more than 5,500 AE 1107C engines are currently in-service and have logged in excess of 54 million flight hours to date.