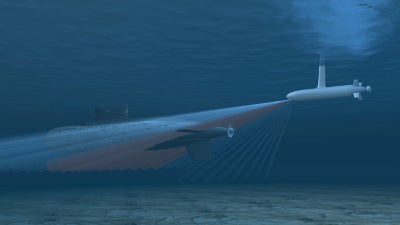 Under the contract, Raytheon will develop and deliver the modular scalable sonar system (MS3) to serve as the primary search and detection device on SAIC’s wave-piercing trimaran vessel prototype.

Designed to provide capabilities such as search, detection, passive-threat filtering, localisation and tracking, the MS3 features simplified ethernet interfaces between displays, signal processing, power amplification and signal reception, as well as ship combat system for an integrated and modular solution.

"The MS3 can be configured to provide capabilities required for ASW in an autonomous environment."

In 2012, DARPA awarded a three-year $58m prime contract to SAIC to design, build and test the ACTUV prototype, which will be capable of tracking silent threats such as diesel-electric submarines.

SAIC will support two and three phases of the unmanned autonomous surface vessel programme, which includes an 18-month $1m option for the fourth phase.

A final design and production plan for the ACTUV prototype will be prepared by the company under the programme’s second phase, with the operational unmanned vessel prototype then undergoing testing, scheduled for mid-2015.