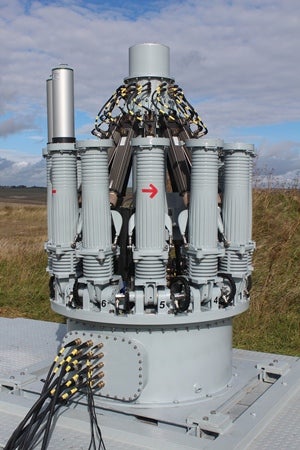 Raytheon Missile Systems and Chemring are planning to conduct live missile firing for the next phase of their multirole Centurion launcher at the Defence Training Estate on Salisbury Plain, UK, during the fourth quarter of 2013.

A minimum of two different missiles will be tested to provide a multi-mission capacity against manoeuvring surface threats.

Raytheon Missile Systems Naval and Area Mission Defense product line vice-president Rick Nelson said the team has plans to launch the missiles to test the Centurion launcher’s capability against a manoeuvring surface threat such as a fast, swarming attack craft.

Earlier this year, Raytheon and Chemring signed an agreement to jointly develop an affordable anti-surface missile system to enhance protection of naval platforms against surface targets.

Intended for use on all types of ships ranging from small patrol boats to large warships, the Centurion is a fully trainable, lightweight naval launcher that provides accurate payload placement to maximise decoy effectiveness and protection of host ship.

"This multimission single-launch platform solution can be installed on a wide variety of surface ships and provides defensive protection in both blue water and the littorals, contributing to the layered defence philosophy against a wide range of threats," Papworth said.

Capable of firing Raytheon missiles with ranges matched to the intended target, the Centurion launcher can destroy inshore attack craft, while the ship’s sensors will provide initial target detection, tracking and identification capability.