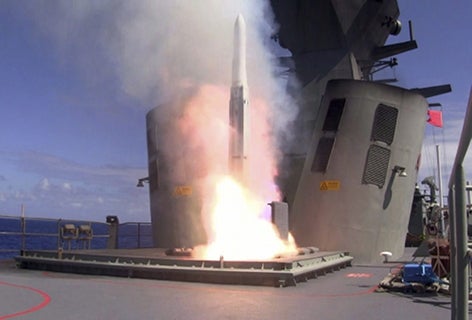 Australia’s RIMPAC Contingent commander commodore Stuart Mayer said that the firing demonstrated the RAN’s ability to operate with its closest allies in the most challenging of warfare situations.

"Success and defeat are managed in seconds when it comes to winning the fight at sea," Mayer said. "Perth’s team has been put to a tough test and excelled."

“Perth’s team has been put to a tough test and excelled."

Perth’s commanding officer captain Mal Wise said that the firings put the new system to a rigorous test and was one in which the ship and crew performed to an outstanding standard.

"This was a complex test of the CEAFAR radar and it has proven itself beyond expectations," Captain Wise added.

Prior to the multinational firing phase, HMAS Perth joined HMAS Darwin and ships from the Canadian and US navies in a six-ship formation intended to perform a coordinated ‘defence’ against multiple target drones.

As well as Perth, the US ships also employed the SM2 missile to decoy targets.

A total of 45 naval ships, 100 aircraft and 20,000 servicemen from 22 nations took part in the exercises, which were designed to increase interoperability between nations that operate within the Pacific Rim.