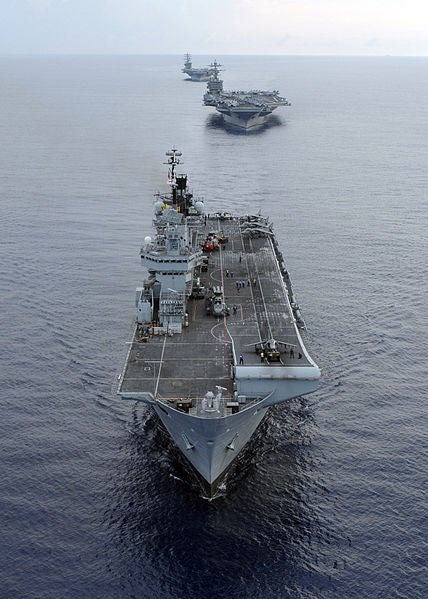 QinetiQ has provided support for the preparation of a comprehensive safety case for the UK Royal Navy's 20,600t Invincible-class aircraft carrier, HMS Illustrious.

The report was prepared as part of the vessel's permanent conversion to a helicopter carrier.

Previously, the UK Ministry of Defence (MoD) had placed orders with QinetiQ through its maritime strategic capability agreement (MSCA) to enable access to a range of specific engineering and scientific expertise and facilities.

Under the marine survivability services contract, the company was asked to create, develop and support the study of HMS Illustrious's consequence analysis model.

Services delivered to the UK MoD were based on QinetiQ's fully integrated Survive software toolset.

"By using QinetiQ's fully integrated survivability software, they were able to run multiple scenarios to allow the prediction of damage to the ship and personnel from an explosion."

QinetiQ developed the ship explosive safety case report as a part of threat hazard assessment (THA), while considering potential threats from all magazines and stowages.

Requirements to produce a consequence analysis model (CAM), which details the damage severity and casualties from an explosion or explosions, is also involved in the document.

MoD Maritime Platform Systems naval architect Andy Boulton said: "By using QinetiQ's fully integrated survivability software, along with the interpretive skills of the QinetiQ consultants, they were able to run multiple scenarios to allow the prediction of damage to the ship and personnel from an explosion and support us in producing a comprehensive and fit purpose safety report."

Invincible-class vessels will be replaced by the two Queen Elizabeth-class carriers, HMS Queen Elizabeth and HMS Prince of Wales, which are due to enter service in 2016 and 2018 respectively.