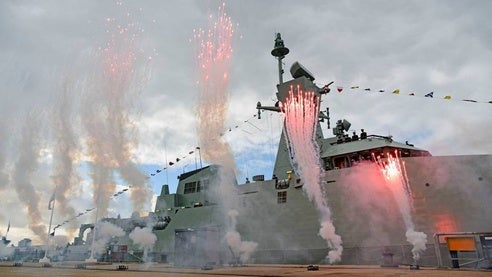 The Royal Navy of Oman (RNO) has received the second Khareef-class corvette, Al Rahmani, from BAE Systems, during a ceremony held at HM Naval Base Portsmouth, UK.

In January 2007, the RNO awarded £400m contract to the company to design and construct three Khareef-class corvettes.

The contract also includes the training of RNO crew as well as initial logistics support for the vessels.

BAE Systems Maritime naval ships managing director Mick Ord said: "The delivery of these three corvettes now has a real momentum behind it, which is testament to the strong partnership we have built with the Royal Navy of Oman and the dedication of everyone on the project."

Designed to provide anti-air and anti-surface capabilities, the Khareef-class corvettes will be deployed to defend from both surface and air threats as well as to protect the international waters and Oman’s exclusive economic zone (EEZ).

"The ship is scheduled to undergo final hot weather trials to demonstrate its ability to perform in temperatures in excess of 45°C."

Prior to departing on a 3,000-mile delivery voyage to Oman, BAE will support Al Rahmani’s crew as they complete flag officer sea training with the Royal Navy.

The ship is scheduled to undergo final hot weather trials to demonstrate its ability to perform in temperatures in excess of 45°C.

Oman Navy had taken delivery of first vessel in the class, Al Shamikh, in June 2013 while the third Khareef-class ship, Al Rasikh, is due for delivery in the first half of 2014.

The vessel will be used to support extended surveillance patrols, deterrent operations, search and rescue missions, joint and coalition operations, as well as disaster relief missions.