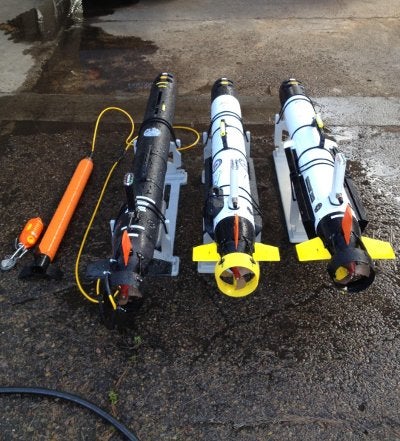 OceanServer Technology and SeeByte have jointly conducted a five-day rapid environmental assessment exercise in the waters off Coronado, US.

During the drill, tests were carried on OceanServer’s Iver2 autonomous underwater vehicle (AUV), which is equipped with sonar and magnetic sensor systems.

The AUV served as a payload platform and validated sonar and magnetic sensor data collection improvements, as well as demonstrating subsequent in-stride and post-mission data analysis methods for naval applications.

A total of 37 individual AUV missions were involved in the exercise, including simulated battlefield data collection methods, and offered a range of high-resolution imagery, as well as demonstrating the recent sonar/platform integration programmes.

OceanServer Technology source Bob Anderson said: "SeeByte’s customers, including the US Navy, can now benefit from the Iver2, a single man-portable AUV capable of carrying leading side-scan sonars and magnetic sensors, as the AUV is now fully compatible with SeeByte’s software."

The cooperative exercise has been designed for navy observers to validate the use of recent technology advances in naval applications.

"SeeByte’s customers, including the US Navy, can now benefit from the Iver2, a single man-portable AUV capable of carrying leading side-scan sonars and magnetic sensors, as the AUV is now fully compatible with SeeByte’s software."

EdgeTech, L-3 Klein and Marine Magnetics companies were involved in the manoeuvre, including technical representatives from the US and Canadian navies.

The Iver2 AUV has been designed for coastal applications such as sensor development, general survey work, sub-surface security, research and environmental monitoring.

In addition to providing higher level of awareness and accuracy, the SeeTrack Military enables users to view operating environment in a single, integrated picture and is currently operational with 15 navies.

Once integrated, the SeeTrack Military software will significantly enhance the overall performance of the Iver2 AUV, while enabling the users to make rapid, well informed decisions.