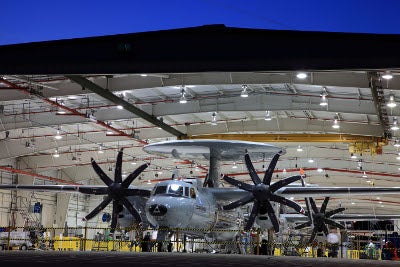 Under the $617m contract, the company will manufacture and deliver five full-rate production Lot 1 E-2D Advanced Hawkeye aircraft to the US Navy.

Around ten additional aircraft are currently under various stages of manufacturing and pre-delivery flight-testing at the company’s Aircraft Integration Center of Excellence, in St. Augustine in Florida.

"With the navy’s E-2D programme of record at 75 aircraft, full-rate production enables the production of the remaining 55 aircraft over the next 10 years, and provides the opportunity for a cost-effective, multi-year procurement," LaGrone continued.

Scheduled to be completed in June 2016, work under the contract will be carried out in Florida, New York, California, Indiana and Illinois, in approximately 200 various locations within the US.

The naval air systems command, by the Patuxent River, in Maryland, will serve as the contracting activity while the E-2D aircraft is planned to achieve initial operational capabilities in 2015.

Image: a Northrop-built E-2D Advanced Hawkeye aircraft stationed at a base. Photo: courtesy of Northrop Grumman.