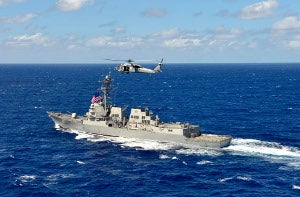 Under the $14.4m contract, Northrop will provide the steering gear system, which is vital for the ship’s control and manoeuvrability and is directly linked to the integrated bridge.

Work under the contract will be carried out in Charlottesville, Virginia, and the company will deliver the steering systems in the first quarter of 2015 and continue into the third quarter of 2017.

"Northrop will provide the steering gear system, which is vital for the ship’s control and manoeuvrability."

The equipment will be deployed onboard the ships at the Bath Iron Works shipyard in Maine and the Huntington Ingalls shipyard in Mississippi, US, prior to the delivery to the US Navy.

The company is also providing navigation and inertial navigation systems for the US Navy’s DDG 51-class ships, under separate contracts.

Powered by four gas-turbine propulsion plants, the ships can cruise at a speed of 30k and are equipped with advanced sensors, as well as weapons systems to engage anti-ship missile threats.

DDG 51-class multi-mission guided missile ships can perform a range of operations, from peacetime presence and crisis management to sea control and power projection, as well as simultaneously engage in air, surface and subsurface battles.