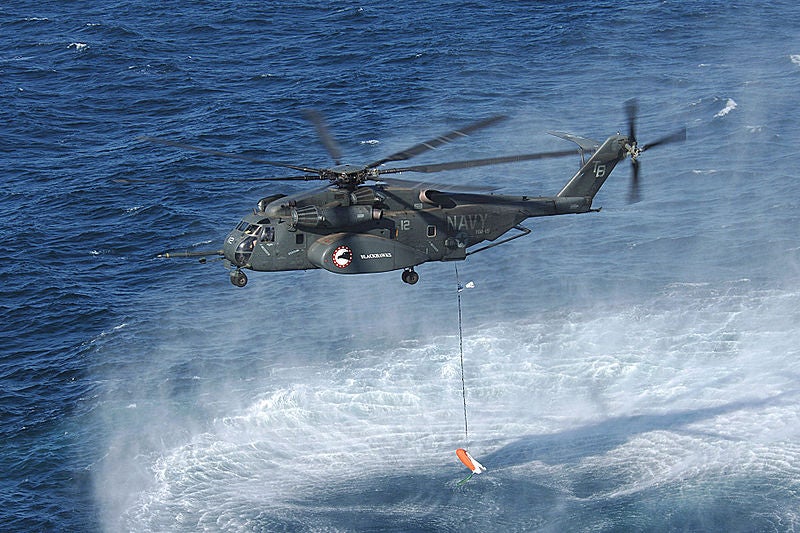 The US Navy has awarded a contract to Northrop Grumman to support the integration of its AQS-24A side look sonar system aboard an unmanned surface vehicle (USV) to enable detection of bottom and volume mines remotely.

The AQS-24A has been designed to support airborne minehunting search missions and is equipped with laser line scanner to enable underwater mines identification, as well as other objects of interest for the US Navy

Initially developed to conduct missions primarily from the US Navy's Sikorsky MH-53E Sea Dragon airborne mine countermeasure helicopter, the AQS-24A high-speed minehunting system has undergone rigorous trials since 2002 from USVs.

Fitted with GPS, Doppler radar, approach/hover/tow coupler, the MH-53E helicopter can be used to conduct airborne mine countermeasure missions and vertical onboard delivery missions for the US Navy.

"The results of this effort could apply to future USV programmes, both in the US Navy, as well as the navies of potential coalition partners such as Australia."

During testing, the minehunting system, which was launched, recovered and towed from a 11m-long USV, validated its ability to detect, localise and classify both bottom and moored mines in real time at high area coverage rates.

Northrop Grumman Undersea Systems business unit vice-president Tom Jones said: "The results of this effort could apply to future USV programmes, both in the US Navy, as well as the navies of potential coalition partners such as Australia."

The AQS-24A system and its predecessors, AQS-24 and AQS-14, have been operational with the US Navy since 1985.