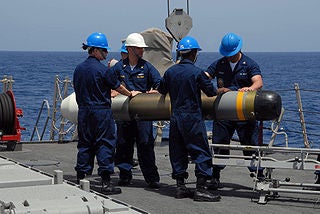 The US Navy has awarded a contract to Northrop Grumman for the production of acoustic nose arrays for the MK54 lightweight torpedo in support of the navy and foreign military sales (FMS) requirements.

Under the firm-fixed price, cost-plus-fixed fee, cost-type contract, Northrop will initially provide 428 nose arrays, with a potential for as many as 3,000 over the life of the contract.

Northrop Grumman undersea systems business unit vice-president, Tom Jones, said: "We are pleased to support the navy's torpedo enterprise once again by providing this undersea warfare capability to the navy and our international partners."

"Northrop will initially provide 428 nose arrays, with a potential for as many as 3,000 over the life of the contract."

The contract also includes MK54 torpedo nose array procurements for the US Navy, the governments of the Commonwealth of Australia and the Republic of India under the FMS programme.

The $45.9m contract has options which, if exercised, would bring the total value of the task order to $294.3m.

Scheduled to be completed in July 2016, work under the contract will be carried out in Lititz, Pennsylvania, Annapolis, Maryland, Santa Barbara and California, US.

Image: sailors load torpedoes into the torpedo tubes aboard the ship's aft missile deck. Photo: courtesy of US Navy.