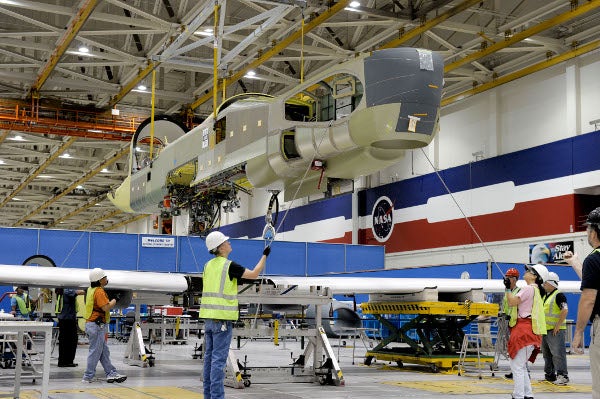 .Named Triton, the MQ-4C BAMS UAS will provide constant surveillance for the Maritime Patrol and Reconnaissance Force (MPRF) to carry out littoral missions.

Northrop Grumman Triton vice president and programme manager Steve Enewold said the aircraft would initially be used for further testing efforts of the navy as the company prepares Triton to be operational in late 2015.

"Eventually, we will use the aircraft as a test bed to improve system performance, incorporate new intelligence-gathering capabilities and conduct demonstrations," Enewold added.

"Eventually, we will use the aircraft as a test bed to improve system performance, incorporate new intelligence-gathering capabilities and conduct demonstrations."

Powered by a Rolls-Royce AE3007H turbofan engine, the high-altitude, long-endurance UAS can cruise at a maximum speed of 357mph and reach a maximum altitude of 60,000ft.

The company completed wing sections integration on to the aircraft’s fuselage at the company’s production facility in Palmdale, California, US.

In order to meet the Triton programme testing requirements, the new unmanned aircraft will be equipped with same intelligence-gathering sensors and communications suite.

In November 2012, the US Navy and Northrop jointly conducted ground testing of second MQ-4C BAMS UAS in preparation for its first flight.