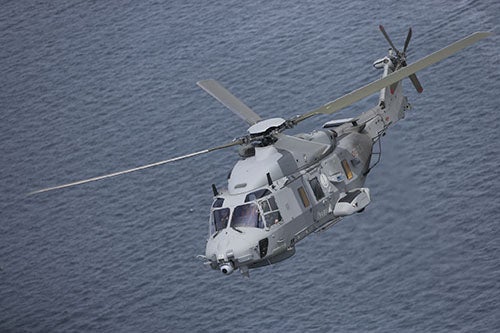 Designed to meet NATO staff requirements, the twin-engine, medium-size helicopter will be assigned to the Italian Navy’s 5th Helicopter Squadron at the Sarzana-Luni base.

A total of 56 NH90 helicopters have been ordered by the Italian Navy, of which 46 will be the NFH variant.

Featuring a wide range of significant advancements in mission capability including mission systems integration for both air-to-surface missiles, the NH90 Step B helicopter is fitted with Marte MK/2S and torpedoes, advanced satellite and encrypted communications, radar and avionics capability enhancements.

The NFH variant can support an array of missions such as anti-submarine warfare, anti- surface warfare, search and rescue, transport, special ops support, boarding, medical evacuation, maritime reconnaissance and anti-piracy, in all environments.

"This NH90 Step B will allow its crews to fully take advantage of its tremendous mission system."

The company will start retrofitting the five NH90 NFH in Step A meaningful operation capability (MOC) standard, which were delivered to the Italian Navy earlier, to bring them to the final configuration from 2014.

Capable of operating safely from a ship even in rough weather, the NH90 also features redundant fly-by-wire flight control system for reduced workload and enhanced flight characteristics of pilots.

NHIndustries, the prime contractor for the NH90 helicopter programme, is a joint venture company owned by AgustaWestland (32%), Eurocopter (62.5%) and Fokker Aerostructures (5.5%).