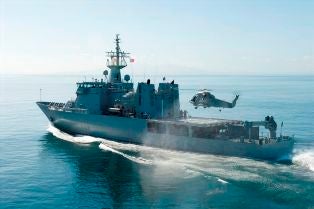 During the flight trials carried out over the past month, a Seasprite helicopter conducted 161 landings and takeoffs from Otago’s flight deck, while marking a milestone on the ship’s full operational potential in all weather conditions, day and night.

Chief of Navy rear admiral Tony Parr said that the ability to land a helicopter on a ship underway at sea by day and night in different wind and sea conditions requires a rigorous and demanding test programme to determine what the limits of operation might be.

"We have been flying helicopters from the frigates for many years, but now we are learning how to operate these aircraft from a different ship with different characteristics," Parr said.

The trials validated the Seasprite’s ability to perform airborne surveillance missions, covering 4,500nm2, from the OPV while enduring up to 2.5 hour flight durations in a single sortie.

"We have been flying helicopters from the frigates for many years, but now we are learning how to operate these aircraft from a different ship with different characteristics."

"Although it will be some time before the full potential is released, the Navy can now begin helicopter operations, during which time we will continue to learn and develop our capability," added Parr.

The RNZN has received two 85m-long and 14m-wide OPVs, HMNZS Otago and HMNZS Wellington (P55), which have a displacement capacity of 1,900t.

The OPVs have been designed to support several missions, including patrolling, maritime counter-terrorism, surveillance and reconnaissance, maritime search and rescue (SAR), as well as humanitarian assistance.