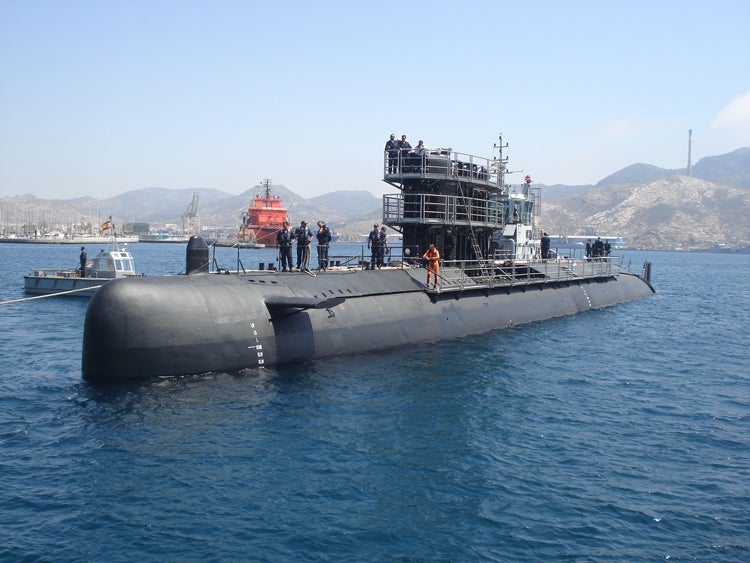 Navantia has successfully re-floated the Spanish Navy’s Mistral (S-73) submarine at the company’s shipyard in Cartagena, Spain, following the completion of approximately 80% of modernisation work as part of the vessel’s drydock overhaul programme.

The drydock overhaul programme includes dismantling the submarine, replacing ageing components and equipment and then reassembling the vessel.

As part of the ship’s 18-month drydock overhaul programme, Navantia and its subcontractors have removed and inspected more than 15,000 pieces of equipment in support of the Mistral submarine, as well as its entire pressure hull.

The remaining 20% of modernisation work, including the completion of assembly phase and testing of upgraded equipment in port and at sea will now begin.

Scheduled to be delivered to the Spanish Navy in September 2013, the drydock overhaul programme will enhance the ship’s ability to operate for another five years.

Having initially entered service with the Spanish Navy in 1977, the S-73 diesel-powered vessel was designed to provide a surface speed of 12k and a submerged speed of 10.5k, as reported by UPI news agency.

"The drydock overhaul programme will enhance the ship’s ability to operate for another five years."

An improved version of the Agosta submarines designed by DCNS of France, S-73 Mistral submarine belongs to Agosta 90B line of vessels that are also in service with the French and Pakistan navies.

Equipped with the Thales DR-3000U radar warning receiver to operate in D to K bands, the 67m-76m long submarines have a submerged displacement capacity ranging from 1,760t to 2,050t.

Capable of carrying a combined load of up to 16 torpedoes and missiles, the submarine can be armed with the ECAN F17 mod 2 torpedo and the torpedo tube launched MBDA Exocet SM39 missile.